When Souls in Purgatory Return from the Dead

With all of the Halloween excitement, costumes, and general revelry today, it’s hard to compete for attention on the blog today. Luckily, Aleteia‘s Susan E. Wills wrote a hair-raising and excellent article, “When Souls in Purgatory Return from the Dead,” on an obscure museum of purgatory that brings our attention back to the Catholic Church, back to the community of saints, and, most importantly, back to contemplation of God’s love and mercy, and the power of prayer.

We don’t hear a lot about Purgatory these days and that’s a shame because most of us will be very lucky to slip in there rather than dropping straight into hell. And lest anyone complain that God is mean or judgmental in sending people to hell, it is well to remember that it’s entirely our own doing, having used the gift of free will to tell God “Nah, I won’t” or more often today “MEH.” 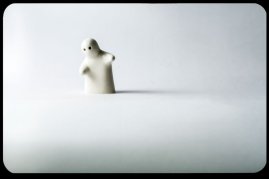 What a (terrifying, creepy but marvelous) gift it would be if, one night, we were awakened by the presence of a deceased family member or friend asking for our prayers and sacrifices, for Masses to be said to gain their release from Purgatory. And especially if that suffering soul left a permanent mark so that – by the light of day and forever after –  we would know that the visit hadn’t been a nightmare occasioned by too much wine and scampi for dinner.

In Jesus’ parable of the Rich Man and Lazarus (Lk 16:19-31), Dives, from hell, begs Father Abraham to send “someone from the dead” to warn his brothers to repent. Abraham replies: “If they will not listen to Moses and the prophets, neither will they be persuaded if someone should rise from the dead.” The reference, of course, was to Jesus’ own Resurrection, but in his great mercy, the Lord has also sent many emissaries from the dead to the living and they have left proof behind.

By “proof” I’m not referring to the many written testimonies of saints concerning purgatory or hell – Sts. Margaret Mary Alacoque, Gertrude, Bridget of Sweden, John Vianney, Maria Faustina, Catherine of Siena, Catherine of Genoa et al. – and visionaries– such as the children of Fatima or Kibeho, Medjugorje or Garabandal – compelling though they are. But actual concrete proof, housed in a small room off the vestry of a church in Rome, the Sacred Heart of Jesus in Prati (also called Sacro Cuore del Suffragio or the Sacred Heart of Suffrage). The neo-Gothic church, completed in 1917, is situated on the Tiber River, ten minutes from St. Peter’s Square. It is unique in being the only Gothic-style church in all of Rome and unique in being home to the Little Purgatory Museum (Piccolo Museo del Purgatorio).

The mission of the Order of the Sacred Heart, founded in 1854 in France, was to pray for and offer Masses for the repose of the souls in Purgatory. Their chapel in Rome, dedicated to our Lady of the Rosary, was largely destroyed by fire on September 15, 1897. After the fire, the priest assigned to the chapel, Fr. Victor Jouet, was astonished to see the image of a suffering face of what appeared to be a soul in Purgatory on one of the charred walls. He obtained the permission of Pope Pius X to travel around Europe, collecting relics that bore evidence of visits from souls in Purgatory. 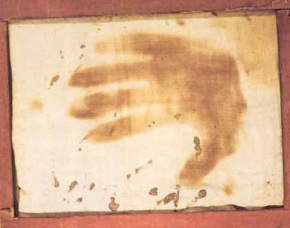 One relic in the museum shows a section of wood from the desk belonging to Ven. Mother Isabella Fornari, Abbess of the Poor Clares Monastery of St. Francis in Todi. Mother Isabella was visited by the deceased former Abbott, a Father Panzini, of the Benedictine Olivetan Order in Mantua on November 1, 1731. To show her that he was suffering in Purgatory, he placed his left “flaming” hand on her writing desk, leaving a scorched hand print, and also etched a cross in the wood with his burning forefinger. For good measure, he also placed his hand on the sleeve of her tunic, which burned through to her chemise and burned her arm to the point it bled. Reporting the event to her confessor, Holy Cross Father Isidoro Gazata, the latter asked her to cut out the sections of tunic and chemise and to give him the small desk for safe-keeping. All were determined to be of supernatural origin.

In 1815, Margherite Demmerlé (who lived in the Diocese of Metz) was visited by a soul who identified herself as her mother-in-law who had died in childbirth 30 years earlier. She asked Margherite to go on a pilgrimage to the Shrine of Our Lady of Mariental and to request that two Masses be said there for her. Margherite asked her for a sign and the soul put her hand on the book Margherite had been reading – “The Imitation of Christ” – leaving her hand print on the open page. Her mother-in-law returned to her after the pilgrimage and Masses had been said to thank her and tell her that she’d been released from Purgatory.

In 1875, Luisa Le Sénèchal, who had been dead for two years, appeared to her husband Luigi in their home in Ducey, France. Asking for his prayers, she left scorch marks of her five fingers on his night-cap, as concrete proof for their daughter of her request to have Masses said for the repose of her soul.

About a dozen more artifacts of this nature can be seen in the Little Museum of Purgatory.

These examples are not meant to shock or frighten, and many, many more can be found in books authored by the renowned 19th Century French Jesuit, Father F.X. Schouppe, for example, “Purgatory Explained.” He wrote:
In giving us a warning of this kind, God shows us a great mercy. He urges us, in the most efficacious manner, to assist the poor suffering souls, and to be vigilant in our [own] regard.

Those who do think about the Four Last Things, may entertain a curiosity about Purgatory. While the Church does not claim to know the nature of the suffering endured by the souls in Purgatory, comments by Pope Emeritus Benedict XVI and the writings of St. Catherine of Genoa (1447-1510), especially her “Treatise on Purgatory,” are instructive. She described Purgatory not as a place engulfed in flames, but rather a state in which souls experience the torment of interior flames as they recognize their profound sinfulness in the face of the perfection of God’s holiness and love for them.

Blessed John Henry Newman composed a beautiful prayer for the souls in Purgatory. In this month dedicated to the faithful departed, we’d do well to recite this often:

Prayer for the Faithful Departed by Blessed John Henry Newman

O GOD of the Spirits of all flesh, O Jesu, Lover of souls, we recommend unto Thee the souls of all those Thy servants, who have departed with the sign of faith and sleep the sleep of peace. We beseech Thee, O Lord and Saviour, that, as in Thy mercy to them Thou became man, so now Thou would hasten the time, and admit them to Thy presence above. Remember, O Lord, that they are Thy creatures, not made by strange gods, but by Thee, the only Living and True God; for there is no other God but Thou, and none that can equal Thy works. Let their souls rejoice in Thy light, and impute not to them their former iniquities, which they committed through the violence of passion, or the corrupt habits of their fallen nature. For, although they have sinned, yet they always firmly believed in the Father, Son, and Holy Ghost; and before they died, they reconciled themselves to Thee by true contrition and the Sacraments of Thy Church.

O Gracious Lord, we beseech Thee, remember not against them the sins of their youth and their ignorances; but according to Thy great mercy, be mindful of them in Thy heavenly glory. May the heavens be opened to them, and the Angels rejoice with them. May the Archangel St Michael conduct them to Thee. May Thy holy Angels come forth to meet them, and carry them to the city of the heavenly Jerusalem. May St Peter, to whom Thou gave the keys of the kingdom of heaven, receive them. May St Paul, the vessel of election, stand by them. May St John, the beloved disciple, who had the revelation of the secrets of heaven, intercede for them. May all the Holy Apostles, who received from Thee the power of binding and loosing, pray for them. May all the Saints and elect of God, who in this world suffered torments for Thy Name, befriend them; that, being freed from the prison beneath, they may be admitted into the glories of that kingdom, where with the Father and the Holy Ghost Thou lives and reigns one God, world without end.

Come to their assistance, all ye Saints of God; gain for them deliverance from their place of punishment; meet them, all ye Angels; receive these holy souls, and present them before the Lord. Eternal rest give to them, O Lord. And may perpetual light shine on them.

May they rest in peace. Amen.

2 thoughts on “When Souls in Purgatory Return from the Dead”